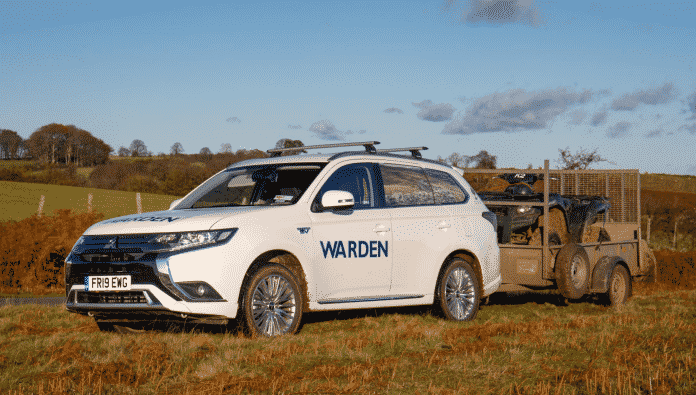 Warden Manager Judith Harvey puts the Mitsubishi Outlander PHEV Commercial to work every day assisting the team with maintaining public rights of way, the upkeep of the popular footpaths and bridleways and the general conservation of the near 20,000 hectares of upland common that is owned by the authority.

This means that the UK’s best-selling plug-in hybrid is often tasked with towing a quad bike to remote locations and lugging fence posts about and is often filled with essential equipment such as leaf blowers and chainsaws.

The Mitsubishi Outlander PHEV Commercial, with its twin-motor 4WD system and Super All-Wheel Control stability system, is more than capable of tackling the demands of the area, while also helping reduce noise and emissions thanks to its electric range of 28 miles, backed up with a petrol engine for additional pulling power or when traveling further afield where recharging isn’t always possible.

Judith Harvey, Warden Manager, Brecon Beacons National Park Authority said “The Mitsubishi Outlander PHEV Commercial is a delightful thing to drive. It’s very comfortable and very responsive and has proved amazing off-road and tows the necessary equipment that we need with ease. I can charge the vehicle at home and via the dedicated charge point that we have at the office, which is also equipped with solar panels, meaning we can charge the vehicle with renewable green energy whenever we can. The Mitsubishi Outlander PHEV commercial has a low carbon output, which is important for the conservation body as we work to lower the carbon emissions of our fleet of vehicles. “

With close to 50,000 registered in the UK since 2014, the Mitsubishi Outlander PHEV remains the UK’s most popular plug-in vehicle with emissions of 46g/km and an official fuel economy figure of 139.7 mpg and a real-world EV range of 28 miles.

A video showing the Mitsubishi Outlander PHEV Commercial in action for the warden team at the Brecon Beacons National Park is available at: https://youtu.be/27Xi0rjzBS0

Do you have an innovative fleet management product? Why not consider exhibiting at our Essential Fleet Innovation Event? https://myessentialfleet.co.uk/fleet-events/ contact mark@essentialfleetgroup.co.uk for more information- we have options to suit all budgets.

Save the date! Come and visit the team at the Essential Fleet Innovation Event at Whittlebury Hall, Thursday 21st May. Visit http://myessentialfleet.co.uk/fleet-events to register your place. https://twitter.com/FleetManager_UK/status/1223583064237977601

Great to have the input of Paul Connor from @SpecialistFleet who will be presenting at the Essential Fleet Innovation Event on the 21st May at Whittlebury Hall. Book your free* place visit https://myessentialfleet.co.uk/fleet-events/ *t&cs apply

Did you know that electric vehicles must pass the same stringent crash safety tests that apply to every other petrol or diesel-powered vehicle? You can learn more about electric cars here: https://www.goultralow.com/faqs/

Are you confident you are covering all the bases when it comes to work-related #risk? If you employ drivers our free resources will help you find any gaps -
http://ow.ly/zKya50ybLJF
#RoadTransport #FleetManagers #RoadSafety #SafetyatWork #RiskAssessment

FOLLOW US
© Essential Fleet Operator 2019
We use cookies to ensure that we give you the best experience on our website. If you continue to use this site we will assume that you are happy with it.OkNoPrivacy policy